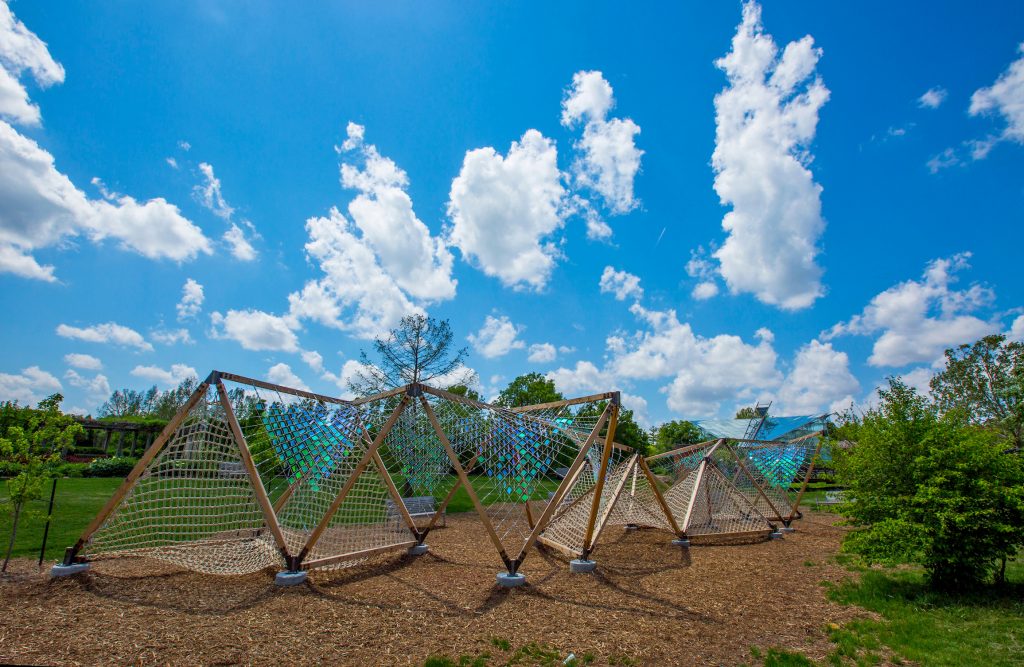 PRISMA is a 1,300sf outdoor structure designed, fabricated, and constructed by the 77-person second-year architecture studio at Iowa State University in collaboration with Reiman Gardens. The project is a companion piece to a kinetic art exhibition, entitled “Forces of Nature,” which took place at the garden from April to October 2018. The tumbling forms of the project are inspired by the plants, animal life, and other natural phenomena on the site, invoking the theme of the exhibit. Climbing nets and woven hammocks encourage the public to interact together with each other and reflect upon their surroundings. The name PRISMA is derived from a system of suspended iridescent panels on the structure that spin in the strong prairie winds that blow across the site, creating a prismatic palette of colors in the sun. This has the effect of making the project, in essence, an architectural-scale kinetic sculpture. 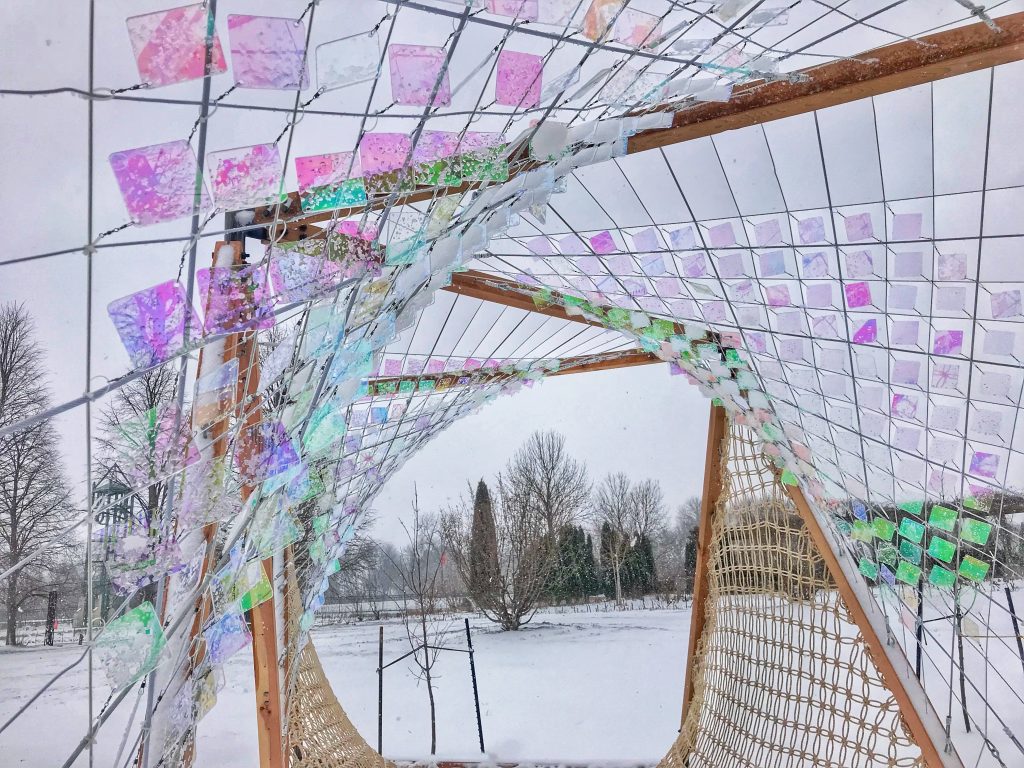 One of the takeaways of the project is how computation and technology lowers the barriers for a large group of novice students to engage in sophisticated design-build activities. Over fifteen weeks, students worked together to address the client’s requirements with a single, unified design. Digital workflows and groupware helped with coordination and ensure the project was the result of a collaborative process, while computing played a key role in helping the students deliver a structure with multiple material systems on time and on budget. In addition, PRISMA utilized computational design for environmental analysis, form-finding, and full-scale fabrication. A goal of the studio was to bring these advanced methods into a shared experience for beginning designers. 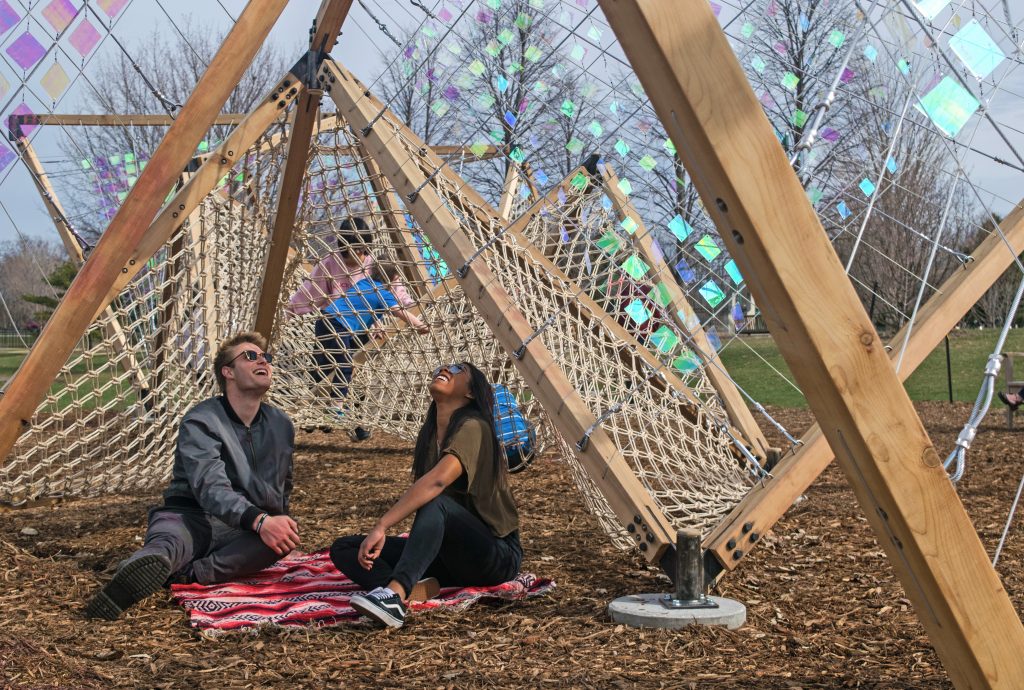 To address the students’ lack of experience with design, computing, and construction, the studio pedagogy involved rapid iterations between digital models and physical prototypes to learn new methods while discussing and refining ideas. Online tutorials and demonstrations supplemented student learning of new software and digital fabrication workflows. Following this, students participated in a series of group charrettes to create proposals for client feedback. These proposals were remixed and shared with other groups of students to distribute authorship and generate new ideas. After a further client review, students iterated through full-scale, modular prototypes until a set of final systems and constraints emerged. This pedagogical model, which leverages technology and the scale of the studio, helped the students to quickly learn new skills, test ideas, and, eventually, agree on a common design.

Once the client approved the design in principle, the final configuration and location of PRISMA was determined through a site analysis that included 3D scans of the gardens. Students used fluid simulations to account for drainage, virtual camera views toward local landmarks to determine the alignment of the modules, and wind simulations to orient the spinning panels to take advantage of spring and summer winds. The final design integrates multiple materials including concrete foundations, steel connections, cedar timber frames, woven poly-dacron hammocks, and steel cable and acrylic kinetic elements. Kangaroo simulations of the hammocks estimated their potential deformations under tensile load and informed the design of the final weave for each piece. Finite element analysis was used to check major structural elements in preparation for an engineering review. Coordinating and fabricating these material systems across so many students was achieved using a master Rhinoceros model with a version control system. Teams of students used the model, along with customized Grasshopper scripts, to generate documentation and 3D assembly diagrams and animations for construction.
PRISMA was fabricated and assembled on site in less than two weeks. It serves as an example of the power of computation to amplify learning while making architecture more accessible for students and the public. 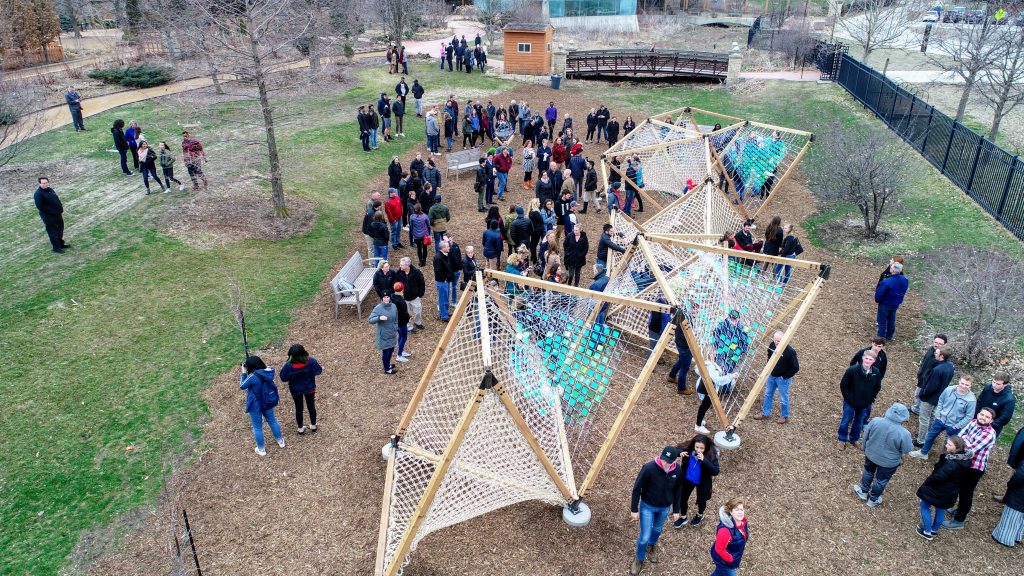 ACKNOWLEDGEMENTS
Special thank you to Jim Howe and Howe Welding and Metal Fabrication. Thank you to Saul Engineering and Brendan Reddy-Best for their assistance. Donations provided by Manatts Construction Company, Star Equipment, Lowes, and Sherwin Williams. Erin Hunt and Mark Moeckl provided support from the ISU Computation and Construction Lab.

FUNDING
This project was funded and supported by Bryce and Rita Pearsall, Reiman Gardens, and the ISU Department of Architecture.